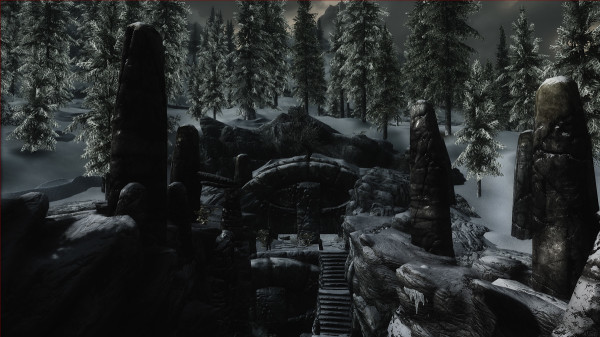 For most of the day, the sky had been cloudy and the darkness had descended upon Solitude. While the day was dreary, Avingard was thankful it wasn’t raining. After joining the Imperial Legion, and equipping his Imperial Legion heavy armor, Avingard had just left Solitude behind to begin his mission of helping recover the Jagged Crown.

Avingard examined his map to find where Legate Rikke had marked the ruins of Korvanjund. The ruins of Korvanjund was quite a trek from Solitude as they were located northeast of Whiterun, which could take almost a day to reach from his current position. Avingard could trek east from where he was, but that would mean crossing rivers, marshes, mountains and tundra, but more importantly, across land he wasn’t familiar with. His best option was to return to Whiterun and then head out east and then north along the road.

After putting his map away, Avingard began his trek to Korvanjund from Solitude. After walking for a minute he came upon a carriage, pulled by a single horse, stopped at the side of the road. A drive was sitting high in the carriage holding the reins of the horse. Near the back of the carriage a guard was keeping a watchful eye on Avingard.

“I can take you to any of the hold capitals,” the carriage driver explained to Avingard. “My carraige is the safest way to travel.”

Realizing that the ruins of Korvanjund was quite a trek, and heading out from Whiterun would make the trip easier, Avingard agreed to the carriage ride. “I’d like to hire your carriage.”

“Where do you want to go?” the driver asked.

The driver nodded his head. “Climb in back and we’ll be off.” Avingard speaking with the carriage driver.

The ride to Whiterun was rough at time, but Avingard did manage to get a little rest on the way. When his eyes were open he saw many of the sites he had seen on his trek to Solitude from Whiterun. This time, however, he wasn’t worried about any bandits or assassins charging after him. Carriages that travel the roads are usually left untouched, especially when they are accompanied by weel-trained guards.

It was late when Avingard arrived at Whiterun, and all was quiet and dark. Avingard looked up and couldn’t see any stars indicating that the clouds were still hovering above. Trekking to Korvanjund at this time would not be best, so Avingard decided to get a room at the Bannered Mare, and then leave early the next morning. He reasoned that it he would reach the ruins early the next day.

After thanking the carriage driver and nodding to the guard, Avingard made his way to the front gate of Whiterun. The two guards looked him over and then let him enter the city.

The city of Whiterun was quiet as all the shops were closed, although the Drunken Huntsman (a tavern), looked lively. Torches were lit to provide some light along the roads, and a few of the residents were quietly making their way to a local tavern. Avingard removed his helmet and continued along the road towards the Bannered Mare.

As he approached the door to the inn he could hear a lot of activity going on inside. He opened the door, and quickly felt the warmth from the fire blazing in the center of the room. The inn was filled with many of the local citizens of Whiterun who have come to relax after a day or work.

Not wanting to waste much time to get some rest, Avingard approached Hulda, who was busy, as usual, behind the counter.

“Welcome back, Avingard,” Hulda greeted him with a smile on her face. “Don’t you look fine with your Imperial Legion armor.”

“Thanks, Hulda,” Avingard replied. “I would like a room, please.”

Hulda smiled and gave Avingard a key to a room, after which Avingard paid Hulda for the room. Making his way from the bar, dodging the many people enjoying themselves, Avingard climbed the stairs to his room. He removed his armor and then placed that, along with his sword, next to the bed. Laying down on his bed, Avingard quickly falls asleep, even with the noise of the in happening directly below him.