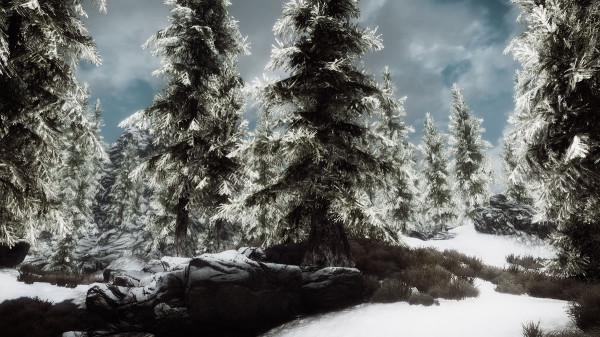 The door behind Avingard slams closed leaving Avingard briefly in darkness as his eyes have yet to adjust to the lack of light inside the castle. As his eyes begin to focus in the dark interior, he can make out a soldier standing watch next to a large open door ahead of him. Beyond the door Avingard could make out three Imperial Legion soldiers, with two of them studying intently at a map sprawled across a large table.

Avingard slowly walks toward the door, keeping an eye on the soldier standing guard. The soldier peers at Avingard intently as he approaches, but doesn’t seem alarmed at Avingard’s presence and allows Avingard to continue.

“Be careful,” the guard warns. “General Tullius and Legate Rikke are in the middle of an intense discussion. Don’t do anything stupid.”

Avingard peers through the doorway to have a look at General Tullius and Legate Rikke. General Tullius is an older gentleman that looks as if he has seen many battles in his lifetime. He is Imperial Legion through and through, and takes his task as General very seriously.

Legate Rikke is a female Nord who is loyal to General Tullius, even though it appears she doesn’t always agree with him. While she is a Nord, she is firmly against Ulric’s claim.

As Avingard passes through the doorway, he begins to overhear the conversation between the two high ranking soldiers.

“He’d be insane to try,” retorted General Tullius. “He doesn’t have the men.”

“That’s not what my scouts report, sir,” Legate Rikke replied. “Each day more join his cause. Riften, Dawnstar, and Winterhold support him.

“It’s not a cause. It’s a rebellion,” Tullius explained.

“Call it whatever you like, General,” Legate Rikke said. “The man’s going to try to take Whiterun.”

“Balgruuf refuses the Legion’s right to garrison troops in his city,” Rikke said interrupting the General. “On the other hand, he also refuses to acknowledge Ulfric’s claim.”

“Well, if he wants to stand outside the protection of the Empire, fine,” General Tullius said as he seemed conent to wait for Jarl Balgruuf to come asking for the Empires help. “Let Ulfric pillage his city.” You people and your damn Jarls,” General Tullius replied in a frustrated tone.

“You can’t force a Nord to accept help he hasn’t asked for,” the General replied. “If Ulfric’s making a move for Whiterun, then we need to be there to stop him. Draft another letter with the usual platitudes, but this time share some of your intelligence regarding Ulfric’s plans. Embellish if you have to. We’ll let it seem like it’s his idea.”

“You Nords and your bloody sense of honor,” General Tullius said seeming a little less frustrated.

“We need the Rift,” General Tullius said starting another topic of conversation. “We need to regain control of it before we can march on Windhelm without worry about our rear guard.

After speaking he notices Avingard standing near the door to the room. General Tullius waits a few seconds after looking at Avingard and says, “Are my men now giving free reign to anyone who wanders into the castle?”

Avingard remained speachless at the question. “Do you have some reason to be here, citizen?” General Tullius asked Avingard.

“I wish to join the Legion, sir,” Avingard replied.

“You do?” General Tullius asked seeming surprised at Avingard’s request. “I don’t normally approve of citizens walking up to me and make such a request. Since this rebellion has been a brutal fight, we could use all the soldiers we can get. Why don’t you have a chat with Legate Rikke.”

Avingard turns to face Legate Rikke, who was listening to the conversation between him and General Tullius. She looks Avingard over and a faint smile appears on her face.

“I’ve got a good feeling about you,” she began to say. “And I don’t often get good feels about anything. A warrior knows to trust her gut. I’m not going to go through the normal process with you. I’ve got a little test lined up. Pass that, and we’ll talk about you joining the Legion.”

“What kind of test?” Avingard asked.

“The kind that evaluates your usefulness during…duress,” she replied. “I’m sending you to clear Fort Hraggstad. If you survive, you’ll pass. If you die, then I’ll have no further use for you corpse.”

“What’s at Fort Hraggstad?” Avingard asked seeming puzzled by the request. All the forts he has visited so far have contained bandits, so he wasn’t sure what he was to be in for.

“The ancients built many of the fortresses that dot the landscape of Skyrim,” Legate Rikke begins to explain. “Sadly, most have fallen into disrepair. And nearly all have been overrun with bandits or other vagabonds. Fort Hraggstad is one of the few that remains mostly intact. We’re going to install a garrison there, but first, you’re going to clean out the bandits that have moved in.”

Avingard was a little relieved to hear that only bandits occupy the fort, but he still wondered how many were occupying the fort. “I’m going alone?”

“Yes. This is a test,” Rikke replied. “I don’t think you’re regular militia material. I want to see what you’re capable of.”

After clearing a few forts since arriving in Skyrim, Avingard felt comfortable with the task. “Consider that fort already yours,” he said with confidence.

“Good,” Legate Rikke said. “That’s what I want to hear. Now go make it happen, soldier. One final thing, you better find some warmer gear. It is cold near Fort Hraggstad.”