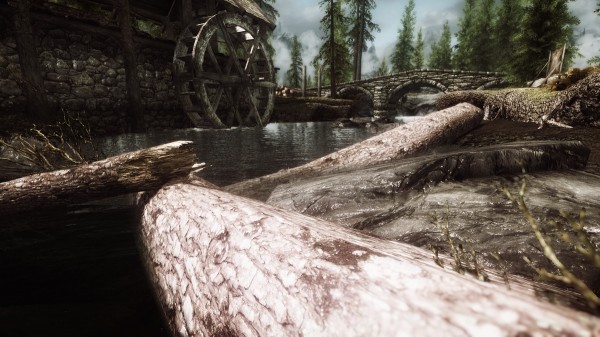 The forests and mountains that and surround Avingard slowly gave way to smaller vegetation and more flat tundra. Avingard was beginning to enter the reasonably flat land of the Whiterun Hold, which was centrally located in the province of Skyrim. It was a very important hold for both the Imperial Legion and the Stormcloaks, and at the moment the hold was in the hands of the Legion.

As Avingard walked down from the more mountainous terrain he noticed that the road split into two directions – east and west. He also noticed a sign by the side of the road that indicated what cities and towns were in either direction. Avingard paused and looked at the sign for a few moments. The sign indicated that Whiterun was to the east, along with Windhelm, while Solitude was to the est, along with Markarth and Rorikstead. Avingard became very tempted to turn west and head directly towards Solitude, but he promised Lod that he would first head to Whiterun for some supplies as it was the closer city of the two.

Looking east, Avingard continued his journey towards Whiterun. A few moments after restarting his journey he heard a thunderous noise behind him. Quickly turning he noticed a rather large humanoid lumbering through the small vegetation of the tundra. This was the first time he had ever seen a giant.

The giant had very pale skin, and wore very little in the way of clothing, but didn’t seem to mind the colder temperature of Skyrim, as they are native to this land. While giants are usually docile unless provoked, this giant carried a huge club in case combat was needed. As Avingard stared at the large creature, a high-pitched screech filled the air as a large rodent, known as a Skeever, went running through the underbrush and lept at the giant.

The giant simply brushed the skeever aside and took out its large club. With it’s club in one hand, the giant lifted its other huge hand high into the air and brought it thundering down unto the skeever, which eventually laid motionless. The pure awe and power of the giant surprised Avingard, who quickly realized that battling any giant would be a tough battle. A giant about to finish a skeever.

After the giant began to continue its journey, so did Avingard.

The rest of the journey to Whiterun wasn’t as eventful as the beginning of the journey. Avingard did witness three more giants walking along the road, until they turned south and disappeared int the mountains. He also say a pack of three wolves, howling and growling on a small incline on one side of the road. Not wanting to fight three wolves, Avingard slowly passed them, but turned around in time to see them hunt and kill a fox.

From there Avingard passed an old fort on the north side of the road, which piqued Avingard’s interest, but he decided to visit Whiterun before any more exploring. To the south, just a little ways from the fort, was a watchtower that was being used by a few Whiterun guards.

As he slowly approached the city he noticed that a large mountain dominated the view to the southeast. His father had told him stories about this mountain, which was called the Throat of the World, and was the tallest mount in all of Tamriel. He was also told that there are seven thousands steps that lead up to High Hrothgar, which is the home of the Greybeards. Avingard couldn’t recall much about the Greybeards, but his father didn’t mention that they are important in some way. After stopping and admiring the view of the mountain Avingard continued to Whiterun.

Finally, after about three and a half hours of traveling, Avingard arrived at the road leading to the gates of Whiterun. Along the road Avingard noticed that carriage that transports people around Skyrim was stopped at the side of the road. The driver smiled at Avingard, who returned the smile before continuing.

As Avingard looked at Whiterun he noticed a large building overshadowing the city. It was a building unlike anything he has seen before and was in awe at how large it was. Obviously, someone built it for a specific purpose, but what that purpose was, Avingard did not know.

Avingard continued along the road to the entrance to the city, passing under a walkway that contained several Whiterun guards, and was probably used as protection. He followed the road up to a large set of doors that provided entrance into the city. Two more guards were posted at the large doors, but didn’t seem to care as Avingard opened the massive doors and entered the city of Whiterun.