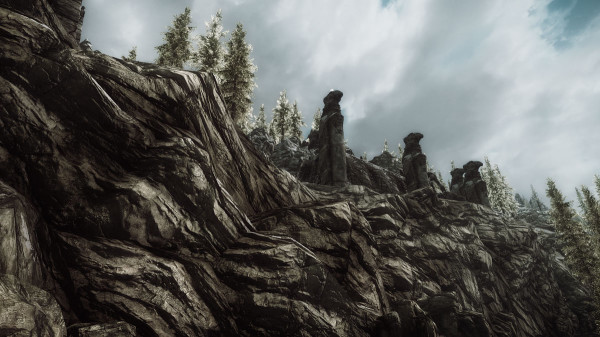 When you roleplay in Skyrim, there is not limit to how you go about doing it. There are may “rules” that you can follow, but everyone will have a different play-style than the next. In fact, many of the rules of roleplaying mimic how you would act in real life, so your characters feels like they come alive. Some popular roleplaying rules in Skyrim include the following:

A character must always eat.
By default, Skyrim doesn’t force anyone to eat, in fact you can go a whole game without even eating or drinking anything. Many who roleplay choose to force their player character to eat as specific intervals. There are mods available that will help enforce this but draining specific skills of your character until they eat something. Such mods can go into great details with regards to the food that they are eating, as well.
A character must sleep at least once a day.
Much like eating, Skyrim doesn’t force your character to sleep, but there are a few perks to doing so. Just like in real life, however, many people feel that their characters should sleep at least once a day. Once again, much like eating, there are mods available that will cause your character to become weak and tired if they haven’t slept after so many hours, or have done a lot of physical activity, such as fighting.
Dead is dead.
This rule is for the hardcore roleplayers, and is not for everyone. Basically this rule means that if your character dies in the game, the character can’t be used anymore – no restoring.
No fast travel.
Skyrim is large, and can take some time to travel from one end of the province to the other, and as they did in Morrowind and Oblivion, Bethesda has included the ability to fast travel. This means that you can simply click on a destination that is on your map, and you have visited, and you can instantly be teleported to that spot. When roleplaying, you may want to not use this feature, but instead travel as you would in real life. The benefit is that you can find a lot more interesting locations and items by doing this. Of course, if the temptation to use fast travel is too great, you could always install a mod that disables that feature.
Don’t run everywhere.
While not related to fast travel, you may also not to have your character run all the time. While it is faster than walking, it is more natural to simply walk along a road instead of running the marathon. This is especially true if your character wears heavy armor. Running, or sprinting, over short distances is fine.
Give your character a lore-friendly name.
If you really want to be as genuinue as possible to the lore of the Elder Scrolls, you can research names for your character that match their race. There are several name generators online that can help you choose a name if you wish to be lore-friendly.
Add a backstory and personality to your character.
Everyone has a story to tell, and your character may have one as well. If you can, try to flesh out your character by providing a story about who they are and how they came to be. The history of your character could be instrumental into their personality. Many roleplayers like creating the backstory to their characters before they begin playing, but like all rules, this one is optional.

The above list isn’t, by any means, an exhaustive list. A quick search online can yield many sites that have very extensive lists of rules that they are following when roleplaying. On the road to Solitude.

When roleplaying in Skyrim, and roleplaying in general, it is important to use your imagination. There really is not right or wrong way you can create and play your character. Be creative, and try different types of characters to see which character you like playing the best. Skyrim provides a system where you can mix and match qualities to make many different characters.

Since I have played Skyrim I have created thieves, melee fighters, mages, and assassins. Sometimes I will even mix characters, such as creating thieves that are also great at fighting with melee weapons, much like a fighter, or assassins that prefer ranged tactics. I may even have two games going where I am an assassin in one game, and the second game a paladin – one who only performs virtuous acts.

In the end, roleplaying in Skyrim is about having fun.